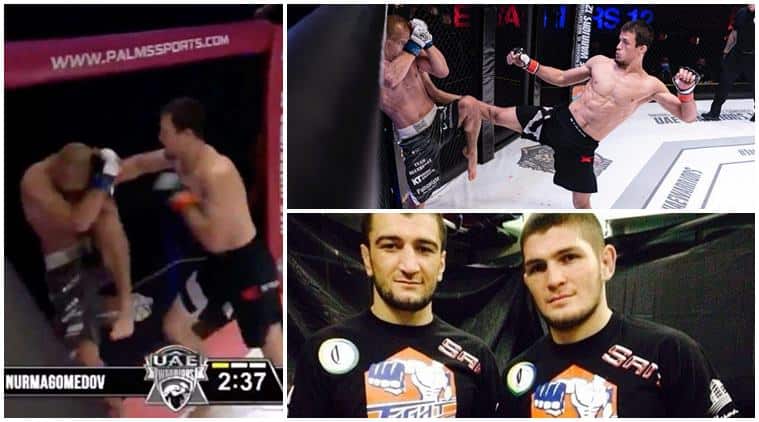 With Khabib at his side, 23-year old Usman needed 40 seconds inside the cage to destroy Kvarnstrom. The bout was the first fight Khabib has been to since his father Abdulmanap’s passing.

The #UFC champ is in the building to corner his cousin, Usman Nurmagomedov.pic.twitter.com/xdKrpVf5Cc

From the onset, Usman was on the offensive with kicks, and knees which knocked the wind out of his opponent and forced referee Marc Goddard to stop the contest.

He eventually won by verbal submission.

Just a one-sided beating from Usman Nurmagomedov, who improves to 10-0. Did anything he wanted. Time for a serious step up in competition. #UAEWarriors12 pic.twitter.com/fPOax7T2Tl

Usman Nurmagomedov (Khabib’s cousin) improves to 10-0 with a win over Jerry Kvarnstrom.

Pieced him up on the feet, took him down and won via verbal submission in the first round following some vicious ground and pound.

Umar Nurmagomedov was signed by the UFC in 2018. Like Khabib, he is an unbeaten mixed martial artist who follows the Sambo fighting style.

With his age on his side, Usman seems to have taken the right steps and with Khabib in his corner, he is learning from the best.

Here are some of the best reactions from his fight-

That was the showcase it was intended to be. Usman Nurmagomedov barely broke a sweat. He’s 10-0 now. #Smesh #UAEWarriors12

Usman Nurmagomedov is something else. Sheeeesh that was a performance.