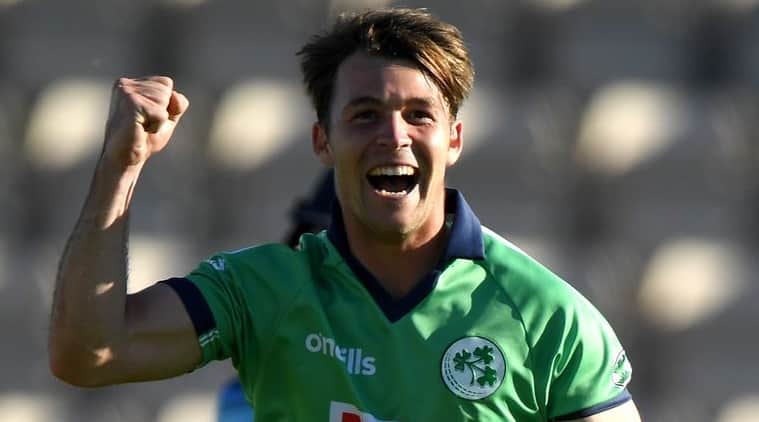 Curtis Campher became just the third Irish cricketer to score a 50 on ODI debut and then took a wicket with his fourth ball in international cricket. (Twitter/IrelandCricket)

Curtis Campher might have been Ireland’s star performer in the 1st ODI vs England on Thursday, but he is yet to play a match in Ireland. The 21-year-old, born in Johannesburg and an aspiring South Africa cricketer till recently, relocated to Ireland earlier this year. He represents the Irish team by dint of his grandmother being born in Northern Ireland.

Campher had a debut to remember, even though Ireland lost by 6 wickets. His score of 59 not out from 118 balls was the highest score from his side. He is only the third Ireland player to mark his ODI bow with a fifty. The first had been Eoin Morgan in 2006.

The first ball Campher faced in international cricket was a hat-trick chance for David Willey, with Ireland 28-5. He then built partnerships with Kevin O’Brien and Andy McBrine, taking Ireland from 28-5 to 172.

In the second innings, Campher took a wicket with his fourth ball. He had Tom Banton caught off a top edge. This was a curious twist of fate. Campher had dismissed Banton in a match for South Africa Under-19 in 2018.

Campher’s move to Ireland has its roots in a mid-match chat in 2018. Ireland were in Pretoria in 2018, playing a warm-up against an Easterns and Northerns Combined XI before the qualification tournament for the 2019 World Cup. Campher, then 19, impressed with 49 from 39 balls for the South African side.

Ireland’s Niall O’Brien, who had heard of Campher’s Irish ancestry, approached him during the match and told him he should think of a move.

Campher told BBC: “Niall O’Brien said, ‘Listen you’re a good player, I will chat to you after the game.’ And that is where one thing led to another.”

Campher relocated to Dublin earlier this year but has not played a match on Irish soil yet.

“It was as good a debut as I’ve seen in an Irish shirt in the last number of years, and it’s a huge positive to take,” skipper Andrew Balbirnie said of Campher in the post-match press conference on Thursday.

“I thought it was very impressive for a guy who’s not even played a game in Ireland yet to come in as a 21-year-old and put in a performance like that,” he said.