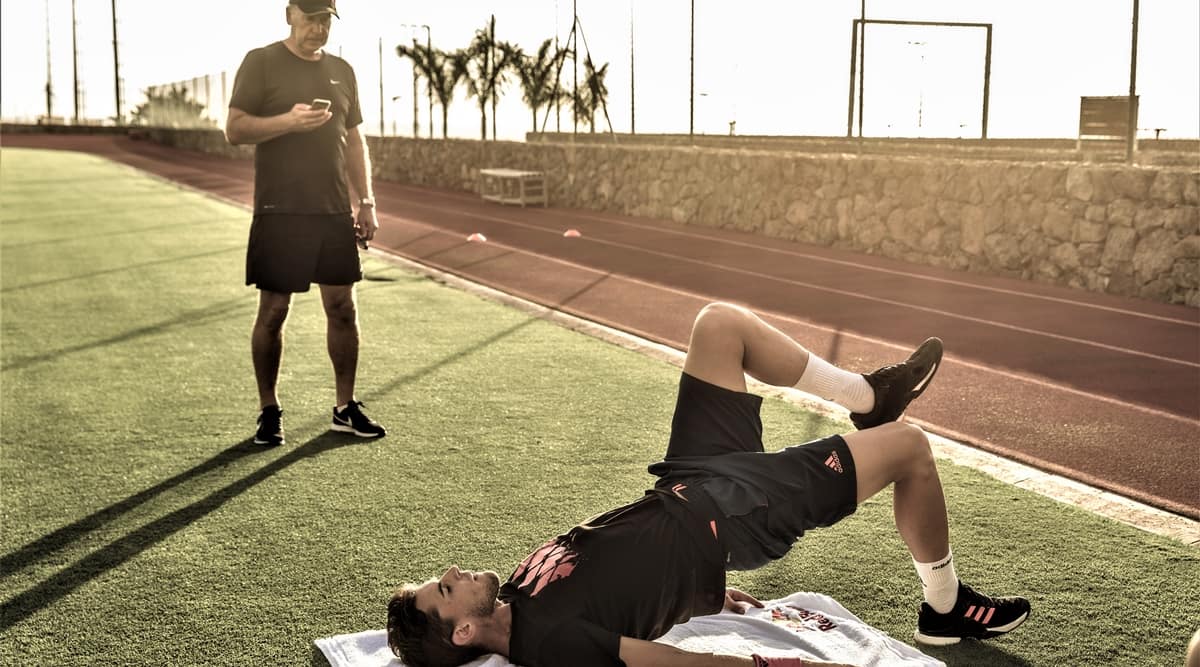 Dominic Thiem at a training camp at Tenerifa on December 2018. (File)

With such high stakes, odds were low on Dominic Thiem becoming the first man since 1949 to win the US Open after dropping the first two sets. Fitness coach Dr Michael Reinpreicht admits he too was “a little bit nervous” for his charge.”Nervous during the first two sets, but I was also convinced that Dominic would bounce back to his normal performance level in the third set. His physicality was the decisive factor,” the Austrian, who has been aiding his compatriot since 2013, tells The Indian Express.

Numbers from Thiem’s triumph earlier this month corroborate the theory. In his column for ATP, analyst Craig O’Shannessy notes that though both Thiem and his opponent Alexander Zverev ran a 5k in the US Open final it was the former who made the match a grind. The average rally length in the first two sets — 4 and 3.3 — went up to 5 and 6.3 in the final two. Reinpreicht reveals it was all by design: “We know, the longer a match lasts, the better it is for Dominic.”

The blueprint for Thiem’s first Grand Slam title was drawn on the sands of Miami beach. Under the watchful eyes of head coach Nicolas Massu, physiotherapist Alex Stober and fitness coaches Reinpreicht and Duglas Cordero, Thiem spent his pre-season sprinting on the beach, running uphill, simulating strokes, dragging weights across the sand and indulging a few selfie-seeking Floridians.

When not by the seaside, Thiem was on the track for what the team calls “gladiator training” — a taxing, interval bodyweight workout to simulate short bursts of intensity, with laser beams and live heart rate monitoring to boot. It was this routine that helped Thiem toil for more than 22 hours on the Melbourne Park hardcourts in his run to the Australian Open final,and to the Major title in New York.

The 27-year-old’s conditioning is in stark contrast to the year before when Massu took over the coaching duties.”The first thing I noticed about Dom as a player was that he needed some time to heal. His body was a little worn by the end of last season and it became more noticeable at the start of this year,” Massu wrote for ATP last March.Massu then reached out to his former trainer Duglas Cordero,who has worked with the likes of Fabio Fognini and Francesca Schivaone.

“Dominic was not physically well and needed to recover him in a much faster and more effective way, to strengthen this very talented player. We proposed a different training, so that he would be re-enchanted with the physical part and with his tennis,” Cordero tells the Indian Express.

Every day brought improvements, and Thiem rode on the momentum to defeat Roger Federer at Indian Wells a month later to win his first Masters title. He then pushed Nadal to four sets in the French Open final, and ended the season with hardcourt wins over Federer and Novak Djokovic at the ATPWorld Tour finals.Then came the Miami sojourn, during which the team ran Thiem ragged.

“Every year in December, we prepared in Teneriffe for the next season. Last year we had a great preparation in Miami,” says Reinprecht, a sports scientist who devised a training and management program called ‘Winning’. “One key factor is always performance diagnostics, to define the actual status of Dominic to avoid ineffective training. The focus there was to improve several aspects. His maximal oxygen uptake, improvement of anaerobic threshold (endurance), explosive power, coordination, muscle mass… And also the ability to relax.”

The training sessions would go on for four to six hours daily, The outdoor training included sessions on the sand, climbs and ramps to improve the aerobic conditioning, speed, power, agility and footwork. The gym workouts would include upper and lower strength training, balance and core. As a result, Thiem’s on-court movement has been quick and assured, and his strokes flatter and harder. “Of course, I’m tired almost every day… But it’s a lot of fun because every day is different exercises,” Thiem said of his training in Miami.

“Outdoor training is hard, since I use intermittent training at high intensities on different surfaces but specifically for tennis.I created a variety of exercises so as not to repeat and in this way, the player is also motivated,” says Cordero, who runs the Tennis Fitness Miamiacademy and has been offering online courses during the pandemic. “The exercises allow the players to work at thresholds close to or above those they face in a match, where efficiency will be a function of speed.”

A training video shows Thiem run 15 consecutive sprints to increase the maximum speed over a small distance; Reinprecht proudly notes that the 15th was just as quick as the first. “I can’t reveal the details, but his improvement in some parameters has been up to 30 per cent,” says Reinprecht. “For example, he has 3kg more muscle mass now.”

But it’s the mentality that goes unnoticed. “He improved technically, but also as a whole personality. He has very good intuition and instincts and shows this also on the court now,” says Reinprecht. “His mentality is extraordinary. I think explosiveness and efficiency in his movements have improved a lot, so his exhaustion on the court is less,” adds Cordero.

“Physically, I think explosiveness and efficiency in his movements have improved a lot, so his exhaustion on the court is less.” The plans and drills wouldn’t work without a willing subject. Luckily, Dominic Thiem is a coach’s dream. “The greatest virtue that Dominic has is the ability to work at a high intensity for a long period of time. He is an incredible athlete, who can maintain that intensity both in the physical part and in the tennis part,” says Cordero.

“In addition, he is a player who trains 100 per cent and gives you everything, and always with a very good disposition and motivation.”

Plans are already in place to further sharpen Thiem’s game, but Reinprecht is satisfied for now. “I have trained world champions in Motocross and Formula 1. I had the dream to support a tennis player and help him on the way to the top ten.” The dream came true,and then some.