MS Dhoni was involved in a controversial moment in the match between RR vs CSK in IPL 2020.

It has just been four days into the 13th edition of Indian Premier League and fingers have already started pointing at the quality of umpiring. After a dubious short-run call in the clash between Kings XI Punjab and Delhi Capitals, another controversial decision made by both on-field and third umpire in the ongoing clash between Chennai Super Kings and Rajasthan Royals has been the buzz on social media.

Moments after the third umpire gave Tom Curran not-out, Sakshi Dhoni slammed the official for his call. The wife of India’s most decorated captain in a tweet urged the officials to use technology the right way. However, she soon deleted the tweet.

“If u r using the technology, then use it the right way… out is out whether its catch out or lbw…” she wrote.

The incident took place in the 18th over when Tom Curran was yet to open his account. He was adjudged caught-behind, but with the batsman left shocked with the decision the umpires decided to go upstairs to the third umpire for a clearer picture.

TV replay showed that the ball had hit Curran’s thigh pad and not his bat and the ball didn’t even carry to Dhoni. The batsman was asked to resume batting.

However, the umpire skipped to check for LBW and the ball tracker showed it was hitting the stumps, which meant the batsman would have been out.

Taking to Instagram, she wrote, “First time I have seen the third umpire is being referred after the player has been given out! Umpiring needs to be improved in such a prestigious tournament! Billions watching it! @iplt20”. The story was later deleted by her. 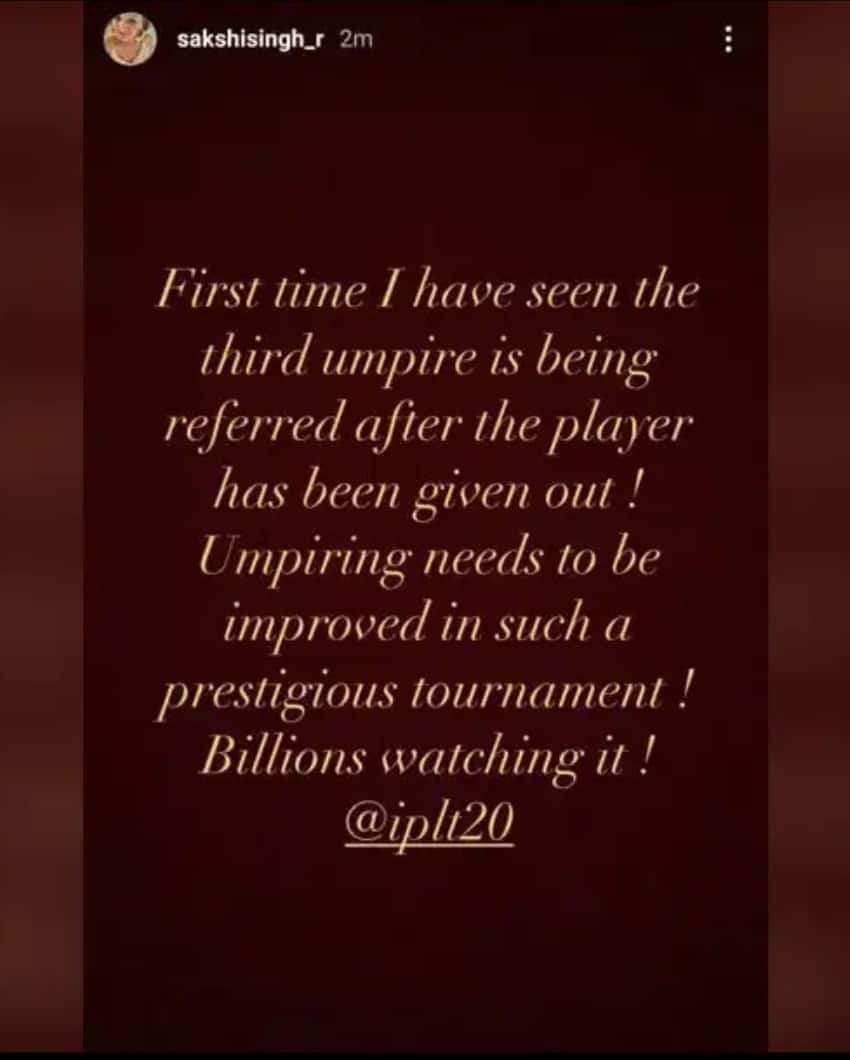 Meanwhile, courtesy to some late blitz by Jofra Archer Rajasthan Royals posted 216 for 7 on the board after being asked to bat first at the Sharjah Cricket Stadium.

Sanju Samson emerged as the top scorer for Royals with 74 off 32 balls, which included 9 sixes and a boundary while skipper Steve Smith made 69 off 47 balls with four boundaries and as many sixes.