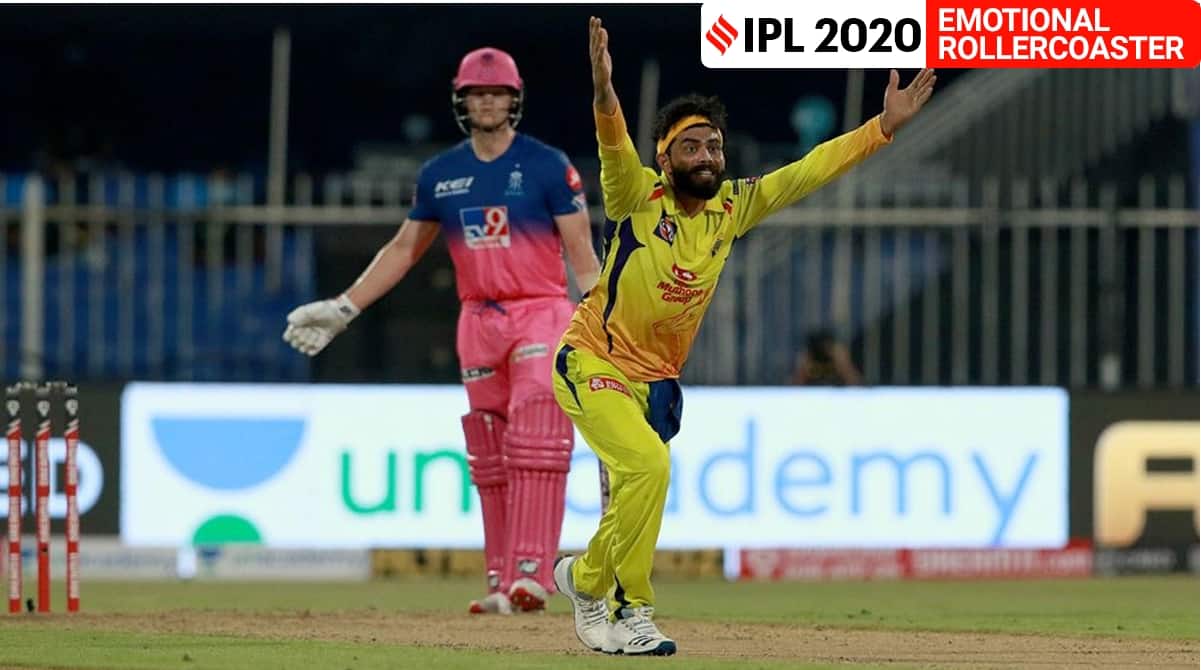 Ravindra Jadeja was Wile E. Coyote on Tuesday, and his bunny Steve Smith turned into the Roadrunner.

A thwack to mid-wicket the previous delivery from Deepak Chahar made it seem like Yashasvi Jaiswal was set for a memorable debut. Whether it was the confidence of the previous hit, or just the sight of a similar ball – Jaiswal went for another boost in the arm immediately after in the third over of Royals innings. What happened next was a top edge, a glance to see the trajectory of the ball, a sudden thought that he ought to take a run – or atleast cross the non-striker, and then a gradual realisation that this would be a rather forgettable opening to his life in the Indian Premier League. Confusion reigned supreme in that brief moment of poor judgement and the 18-year old spent what would seem like a long walk back to the Sharjah Cricket Stadium pavilion thinking of what had just happened. A couple of overs later, Sanju Samson was assaulting all the empty seats in the stadium while the camera continued to pan to Jaiswal, who would clap at his teammate’s violent manhandling of Piyush Chawla’s bowling, and then occasionally the wry shake of his head at what might have been.

The usually wily Ravindra Jadeja was Wile E. Coyote on Tuesday, and his bunny Steve Smith turned into the Roadrunner. Jadeja could have dismissed Smith for the seventh time in T20s in the ninth over, only his appeal was turned down twice. After being denied by the umpire, Jadeja — convinced that he had trapped the Aussie in front of the wicket — asked his captain to review the decision. The confident request turned into a desperate plea over 15 seconds, but even a begging Jadeja couldn’t trigger the Dhoni Review System. Salt into the wound? The ball would have crashed into the leg stump, replays showed.

Jadeja was determined to get his man, even while prowling at point. He charged in after a Smith dab, scooped up the ball, got in the throwing position, but with nobody backing up, threw up his hands in frustration. Next ball, he went for it anyway. With Smith out of the crease at the non-striker end, Jadeja chanced his rocket arm and conceded an overthrow, earning an earful from bowler Lungi Ngidi. The coup de grace came soon afterwards. In his final over, Jadeja induced a rare mis-hit from Smith towards the long-off boundary, where Sam Curran bungled the easy catch over the ropes. Smith was at 31 when he escaped the LBW. He added 38 more, gluing the Rajasthan innings together. And CSK never used their review.

Upon dismissing Shane Watson with a slider, Rajasthan Royals leggie Rahul Tewatia slipped away from the on-rushing teammates, stood still and plonked both index fingers into the ears, all the while staring unblinkingly at Watson. It was not a spontaneous bit of celebration, rather he followed up each of his three wickets with the same manoeuvre. European football flocks should be well acquainted with what’s called a fingers in the ear celebration. It might not be quite as iconic as the cradle rocking of the Brazil trident in the 1994 World Cup, or eccentric as Paul Gacoigne on his revolving dentist chair, but it’s catching up fast. Barcelona forward Phllippe Coutinhio could be credited for its swelling popularity. He once explained: “We should never listen to people who will de-motivate us because their speeches only deviate us from the real focus we should take.” At that time, he was under the weather for his shoddy performances.

It could be true for Tewatia, whose IPL career has not quite taken off, despite the hype that had attended his debut in 2014, incidentally in Rajasthan’s stripes. Ever since, he has turned up for Kings XI Punjab and Delhi Daredevils before returning to the Royals, making only 21 appearances in this span. So the celebration could mean: “Just shut out the voice from outside. I am not listening.” Only that in the shuttered-down stadium, there was hardly any noise other than the echoes of their own shouts. The positive spin is that empty stands have not extinguished the whim of celebrating.