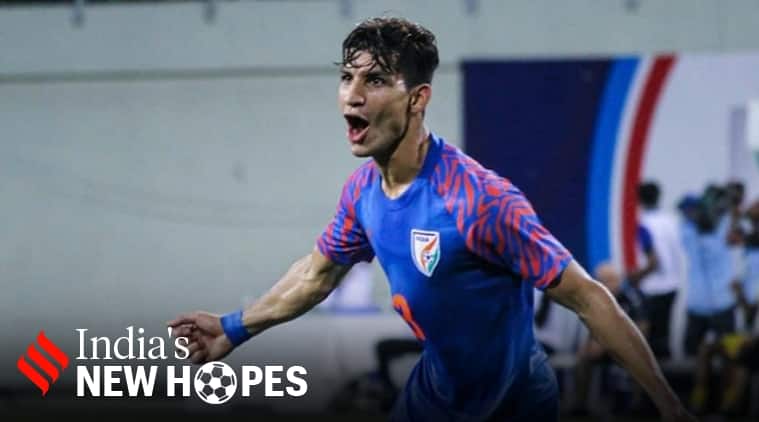 Narender Gahlot missed out on the FIFA U-17 World Cup in 2017 due to an anterior cruciate ligament injury. (Source: AIFF)

With the restart of the domestic season weeks away, The Indian Express looks into the up-and-coming stars of tomorrow in ‘India’s New Hopes’.

When Narender Gahlot rose above the Syrian defenders just nine days after his international debut last year to score a goal, it was a moment of ecstasy in his uphill trek of recuperating from missing out on the FIFA U-17 World Cup, even though the trek had been anything but.

From an Anirudh Thapa corner, the 184-centimetre tall centre-back found the opposition net on July 16, 2019, during India’s Intercontinental Cup campaign with a towering header. “It still feels like yesterday,” Gahlot tells indianexpress.com.

With the goal that helped India draw 1-1 against Syria, Gahlot etched his name in history, becoming the second-youngest player — at 18 years, 83 days — to score an international goal for India.

“I want to thank God for the past year. Signing for Jamshedpur FC, making my debut for the national team and then scoring for India within a matter of months surpassed my dreams. It was all possible because of my coaches, my mentors, and my friends,” says the Delhi-born teenager.

“Yes, I made mistakes in last year’s Intercontinental Cup, but everyone supported me. Even after making a few errors on my debut against Tajikistan, the coach [Igor Stimac] trusted me for the match against Syria. After my goal, he said, ‘I know that you have the potential, you can reach greater heights’.”

“It’s a proud moment for me, my family and my country.”

We caught up with Narender Gahlot after #INDSYR & the young defender shared his joy of scoring his first goal for the @IndianFootball team and more!#IndianFootball #BlueTigers #BackTheBlue #HeroIC pic.twitter.com/ZQmAX4KwKs

The adulation was befitting for the 19-year-old, who has already triumphed over the horrors of an anterior cruciate ligament injury, which ruled him out of the FIFA U-17 World Cup in 2017.

But Gahlot never gave up. He continued to make strides in his career, joining Indian Arrows soon after the conclusion of the tournament.

“My injury before the World Cup taught me one thing — we can’t control everything. But with the support of my family, I recovered fully and joined Indian Arrows in 2017. Upon joining, Floyd Pinto sir helped me a lot to improve my performance,” he says.

After spending two years in the I-League, getting valuable first-team minutes, Gahlot’s time had come for a step up. “In the summer of 2019, I received an offer from Jamshedpur FC. I sat down with my brother and my coaches to discuss the offer. They said, ‘You shouldn’t think about the money right now. What’s more important is choosing a club where you can fight for your position, where you can grow as a player’,” recalls Gahlot.

“Plus, Amarjit [Singh Kiyam] had joined JFC a year back, Jitu [Jitendra Singh] had also received an offer like me, and the facilities were good in Jamshedpur, so the decision wasn’t all that hard.” Before his tryst with football began, the Najafgarh resident had considered playing cricket as a profession.

“During my childhood, cricket was all I knew because of my uncle. Everyone in my family always wanted me to be an expert in any sport though. After one of my friends introduced me to football, my goal changed. I went from playing for IYSA (India Youth Soccer Association) academy in New Delhi to joining Chandigarh Football Academy (CFA) within two-three years,” says Gahlot.

“I also played for Sports Authority of India (SAI) in Dehradun and during my time there, I got selected for the India U-16 squad in 2016. Four years later, I am still learning — from the best now. Sunil-bhai always shares his valuable experience in the national camp, and Jhingan-paaji shows me how to be effectively aggressive with my defending.”

READ | Meet Edmund Lalrindika, the forward crossing one hurdle at a time

After racking up around 900 minutes in the ISL last season, Gahlot expressed his desire to level up next season — cementing himself as a mainstay centre-back, instead of a left-back, in Jamshedpur FC.

“I am comfortable in both the positions, but since a centre-back has more responsibility, I want to challenge myself to excel in that position. During the lockdown, I have been working hard on various aspects of my game — my short passing and my ability to be vocal at the back,” says the PUBG enthusiast.

When asked how he is spending the extra time at home now, living with his parents, who own a dairy business in Nithora village in Ghaziabad district, he says, “When I am not playing cricket or cycling, I try to help with the daily chores at home. Along with my mother, I even made some sweets like kaju katli and jalebis.”

“But the dates of the World Cup qualifiers are out, so I am staying away from them.”