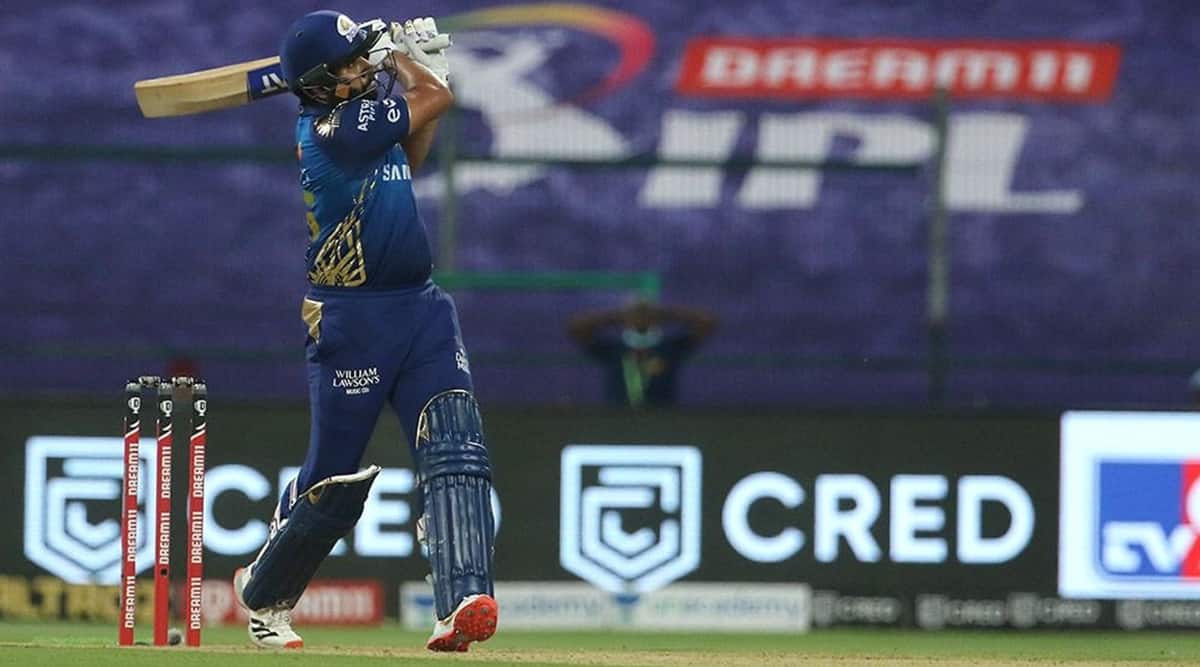 Rohit Sharma was finally dismissed for 80 off 54 balls. (BCCI/IPL)

Rohit Sharma had rung the warning bells before IPL 2020 when he looked in ominous touch in a practice session of Mumbai Indians and hit a massive six that travelled 95 metres to hit a moving bus. On Wednesday, Rohit seemed like he was in the groove from the start against Kolkata Knight Riders in match four of the IPL in Abu Dhabi.

Right from the first over when he lifted Sandeep Warier with an upper-cut on the off for his first maximum, it seemed like he was set for a long one against his favourite opposition. Against, KKR, Rohit has the most number of IPL runs (875*) bettering Warner’s tally of 829 runs.

But the Hitman had arrived when he smashed Cummins over deep mid-wicket for half-a-dozen. One of the best limited-overs batsman in world cricket vs one of the finest modern-day pacers irrespective of the format — the Rohit Sharma vs Pat Cummins face-off promised a lot on paper. But on-field Rohit dominated the fast bowler when he smoked another one from Cummins over deep mid-wicket for six more runs.

Cummins was equally guilty of trying to pepper the MI captain with too much of short-stuff — a move which failed completely as Sharma continued to pull him with ease.

READ: Pulling punches: How Rohit Sharma executes those without violence

In Mumbai’s opening encounter against Chennai Super Kings, Rohit had a quiet outing with the willow and this time seemed keen to make amends.

His six-hitting spree did not stop there as he sent KKR’s MVP Andre Russell into the stands. The elevation that Rohit managed to get and the ease with which he was able to clear the boundary playing the pull/hook was simply incredible. According to cricviz — one in 5 pull/hooks is a six from his bat.

A key battle expected in this contest was Rohit Sharma vs Kuldeep Yadav. The chinaman’s ability to deceive the batsman in the air was expected to trouble the right-hander. However, Rohit was in a marauder mood and KKR’s strategy of bowling it short to him backfired massively. Time and again he rocked back on to the backfoot and the timing was immaculate as he sent the ball into the stands.

Rohit Sharma also reached the milestone of 200 sixes when he danced down the track to Kuldeep and lofted him through the line to clears long-on with ease. Sharma becomes the second Indian after Dhoni to smash 200 sixes in IPL history.