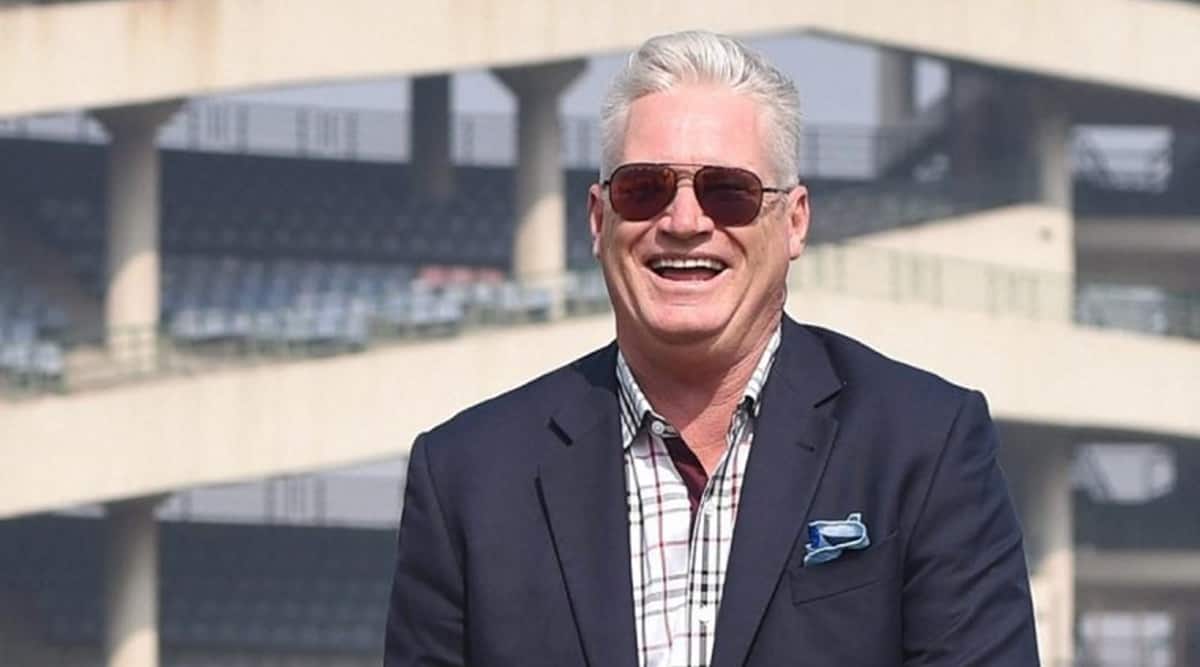 Dean Jones, 59, suffered a cardiac arrest and passed away on Thursday. (File Photo/PTI)

Thousands of miles away from the IPL game, there was another struggle underway on Thursday: between uber professionals trying to get on with their job and friends visibly shaken by a dear loss. Hours after Dean Jones’ passing, his Dugout co-commentators Scott Styris, Brett Lee and others remembered the professor and the player.

There were no ‘wickets’ or ‘big overs’ on Thursday. No banter or dance moves. It didn’t feel right without the man who brought the party together. And if you didn’t already know that Dean Jones was the leader of the Dugout commentary bunch, Styris spelt it out for you.

“You’ll see the calling chair, for the captain of the Dugout and that’s the great Dean Jones,” Styris mourned his cheeky nemesis through tears and a scrunched up face.

“That’s the red book that he used to get all these stats in… some quick work notes, the jacket he wore last night and we will keep that spot open for him tonight.”

A Dean Jones tribute that might bring a tear to your eye.

Red book and the barmy theories

The red book, used as a jotting pad by Jones, became a running gag over the years, inspiring contests, Twitter handles and a practical joke where Styris printed out multiple t-shirts featuring photos of the Australian great and his diary.

In addition to notes and stats, the red book carried some bizarre theories according to his colleagues. They recounted a few, including one where Jones proposed a third umpire stationed next to the non-striker and facing the bowler, exclusively to call no balls.

There was another from Wednesday.

“Just yesterday, this, quite frankly barmy theory that if a batsman gets tired he should be allowed to just walk off to let someone else have a go,” grinned Swann. “Even on the bus, we were laughing about it.”

“We actually thought we would try and make a suggestion of a ‘Wall of Stupidity’,” Styris said. “He was known as the professor and it’s because he had so many theories. He wanted to be an innovator.”

Later on, Styris glanced at the red book and thought out loud.

“The first year, I tried everything to pinch that red book off him, to see what was written in there. It wouldn’t feel right to take it from him now. It’ll be a bit… too easy,” a sobbing Styris pushed the last two words out.

During the first week of IPL, nothing seemed to annoy Jones more than ordinary running between the wickets. Batsmen running off the pitch and slipping while turning. Batsmen changing lines and taking longer to reach the other end. After another such transgression, Jones had left his chair to demonstrate how to run as the co-commentators called: “Don’t pull a hammy.”

That night, with Jones on a break, the broadcasters ran a question: “What’s slower, Dean Jones’ running or a Boeing 747 turning?” With Jones not there to defend himself, Styris batted for his frenemy and called it unfair. “He was one of the best runners and is still very fit.”

READ | A struggle, some generous praise and a call for a moment of silence

On Thursday, Jones’ aggressive running was remembered by all.

“There are very few players who change the game and in the 80s, Dean Jones did that with his running between the wickets. He said it wasn’t all about boundaries and the running that you see a lot today was due to him,” Lee said in his opening monologue.

On his first night in the dugout, Sanjay Bangar was put through the wringer. With Ambati Rayudu going hammer and tongs against Mumbai Indians, Jones asked Bangar: “After a knock like this, do you think he can be in contention for the T20 World Cup next year?”

Bangar, who was Indian assistant coach when Rayudu failed to make the cut for last year’s 50 over World Cup, took his time.

“Well, the team has moved on. There are young players coming in with Shreyas Iyer, Manish Pandey…” he began before Jones cut him off: “Based on the performance tonight, does he make the team?”

“Just say ‘everybody has a chance’,” Swann came to the rescue. Bangar repeated, laughing and Jones let him off the hook.

On Wednesday, Bangar tried to pull one on Jones. Picking up on the latter’s quirk of yelling ‘baavan’ (Hindi for 52) anytime the number flashed on the screen, Bangar asked: “What comes after baavan, Deano?”

“Fifty-three, thank you,” Jones shot back without missing a beat.

“My association with Deano was probably for the last two or three weeks. And I totally understand what you guys must be going through. You’ve been with him for close to 5-10 years. But what I experienced in the 10 days is the warmth that he was giving me, the way he was making me feel wanted. The way he was getting me involved. And when I came in here today, the lull and the silence was beyond words,” Bangar said, and talked about the exchanged notes with Jones at the breakfast table.

“The way he loved the game, nobody else did. And the way I wanted to learn the game, I feel I’ve lost out on a very dear friend.”