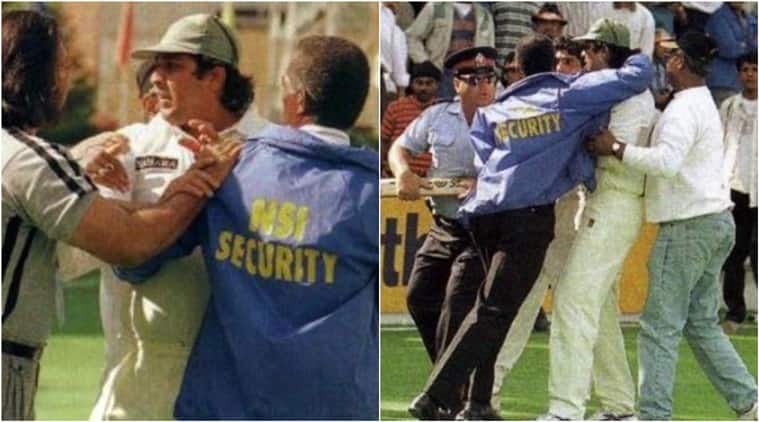 An aggressive Inzamam-ul-Haq had been stopped by security officials. (Source: AFP/File Photo)

Remembering the 1997 Sahara Cup incident in Toronto, when Pakistan’s Inzamam-ul-Haq had entered into the stands with a bat in his hand to beat up a fan, former India batsman Vinod Kambli said he had been completely taken back at the turn of events.

On September 14, 1997, India and Pakistan had locked horns in the second match of the Sahara Cup, with the opener having been won by India by 20 runs.

During the second innings of the match, when India were chasing a target of 117, the crowd was on the backs of the Pakistan players, especially, Inzamam-ul-Haq. According to Dawn, one supporter had taunted the former Pakistan captain by saying, “O mote, sidha khara ho [Hey fatso, stand straight], mota aloo, sara aloo [fat potato, rotten potato].”

Kambli recollected that just moments after Inzamam was sledged, he had signalled to the Pakistan twelfth man to bring him a bat.

“We were sitting in the dressing room and then suddenly we saw Inzi [Inzamam-ul-Haq] trying to show for a bat. He was just pointing out to a bat, so I saw the twelfth man taking the bat straight to him after passing our dressing room,” Kambli said on The Greatest Rivalry podcast.

“We were all questioning why a twelfth man was taking a bat to Inzamam, and then the entire incident happened… for what it was, it was shocking, it was really shocking.”

The reason for Inzamam’s reaction was later revealed. Waqar Younis had added that the fan had also been directing inappropriate comments towards Mohammad Azharuddin’s wife.

“Yes, there was someone calling him ‘aloo’, but also, what exactly happened [was that] there was someone in the crowd who was not very good to Azharuddin’s wife. I think they were just talking rubbish and Inzi being Inzi, he didn’t really like it,” Waqar Younis had said.

Both the team’s captains had intervened and had asked the crowd to calm down after the incident. After a 40-minute delay, the match had resumed and India had eased to a seven-wicket win.

Inzamam had been given a two-match ban and had been presented in court for his actions. India had romped to a 4-1 series win.