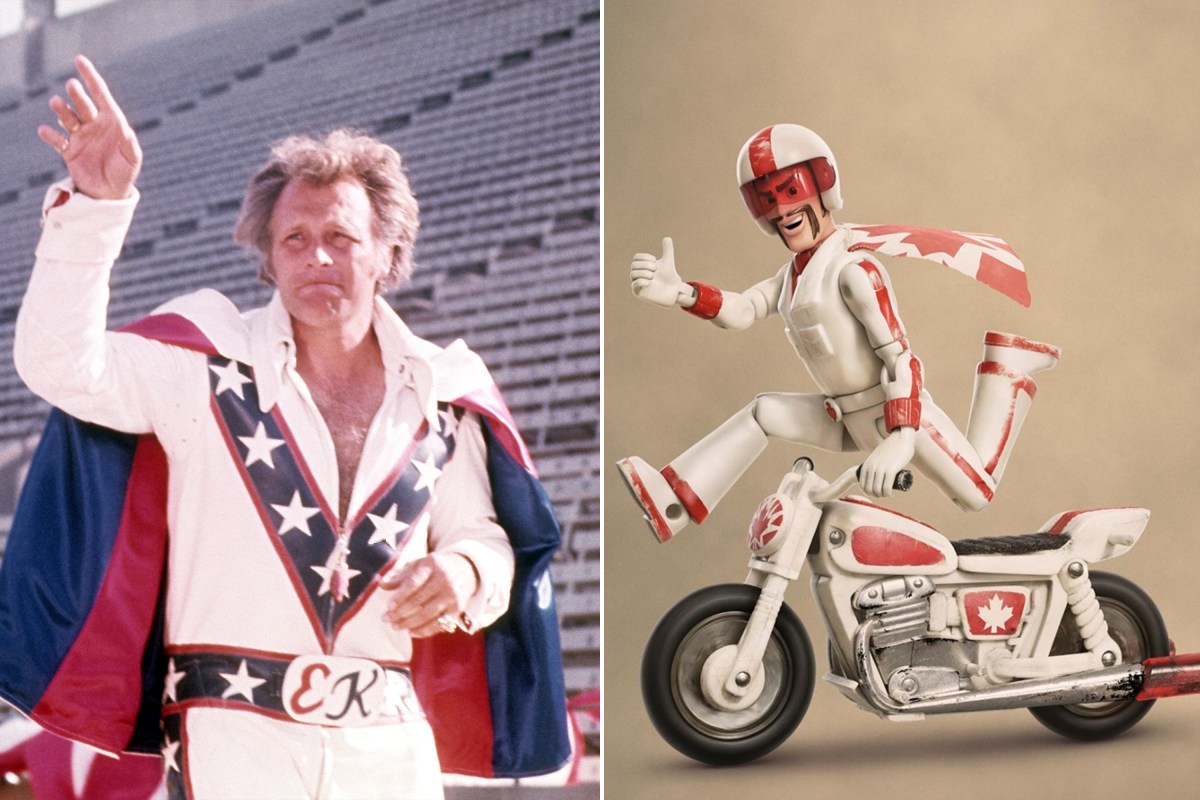 “Toy Story 4” daredevil Duke Caboom may look like an homage to Evel Knievel — but the ambiguously inspired cartoon is now blowing up in the filmmakers’ faces.

K&K Promotions, a company which claims rights to the legendary stuntman’s image and likeness, is suing Disney, Pixar and others for their liberal use of Knievel’s persona in the beloved family film, according to a lawsuit filed by attorneys Randall Jones and Ronald DiNicola in US. District Court in Las Vegas.

“Toy Story” creators weren’t exactly trying to hide the similarities between Caboom, voiced by Keanu Reeves, and the late risk-taker. Akin to Knievel’s signature Americana look, the animated toy sported a white jumpsuit and cape, and performed tricks on a motorcycle — the vehicle of choice for the extreme athlete, who died in 2007 from pulmonary disease.

He is perhaps best known for jumping the fountains of Caesar’s Palace hotel in Las Vegas, clearing 13 buses at England’s Wembley Stadium or launching himself in a steam-powered rocket over Snake River Canyon in Idaho.

Kelly Knievel, son and spokesperson for K&K, said: “Evel Knievel did not thrill millions around the world, break his bones and spill his blood just so Disney could make a bunch of money. He remains an instantly recognized icon, as demonstrated by the huge popularity of the re-issued Evel Knievel Stunt Cycle among kids who hadn’t even been born when my father died a dozen years ago”

In the suit, first obtained by TMZ, K&K allege that producers did not seek permission or approval to base their character on Knievel. They also point out that the toy depicted in the film, atop a wind-up motorcycle, is a near replica of the original Evel Knievel toy, first produced in 1973 and still sold today. Now, “Toy Story” is raking in cash for their ripoff being sold as “Duke Caboom” in stores.

They claim this isn’t the only time “Toy Story” has tried to pull a fast one, citing Tony Hale’s character “Forky” as an example. Allegedly, the “Arrested Development” actor was forced to dance around the fact that the hybrid utensil he voiced in the film is based on a “spork,” a trademarked term, during interviews.

Based on Disney’s enormous profits, which continue to grow through movie merchandising, K&K is reportedly asking a judge for “big-time damages,” according to TMZ.